Can you suggest a good love hotel in Busan? I am taking the girlfriend there for the weekend...

Can I suggest a good Love Motel? Of course I can...
The thing is though, it's Busan! Oh Busan, I don't know what your problem is, but your motels are seriously lacking. Even in Haeundae half of them are out of date and commit the deadliest sin of all; being brown.
No one and I mean no one, could seriously want to stay in a motel like this, could they? People, there is too much brown strangeness in this picture! What the hell is that on the ceiling? This is meant to be a VIP suite!
But anyway, I refuse to allow my friend to stay in a brown motel with his new lady. I may not be able to get him something in his ideal location, but I will find him something worthy of a first weekend away with his girlfriend.
So, first choice...
Hotel View

I like this place and I think it may appeal to my friends design sensibilities, there's something clean and graphic about the styles of the rooms and the prices quoted are very reasonable; 60,000 Won for a VIP suite is fantastic! Check out the VIP suite here...

And what a bathroom!

Even the cheapest rooms seem to have baths, and tasteful pictures of nude women, no less.

Hotel View is a fair way out of town and I suspect that will cause it to loose points, but looking at the map it seems to be very, very close to the bus terminal and also the subway, so it shouldn't take you long to get to where you want to go.

Next up we have Hotel We

I have to say, I really like the look of some of the rooms in this place although the prices are slightly higher, with a VIP suite being quoted at 70,000 Won per night at the weekend. Check out the VIP rooms...

'What's that I spy, through those doors?' Did I hear you say? Well that would be the...

Seriously, I'm getting excited on your behalf right now! A hot tub for god's sake! How much more romantic can you get?

The bath in room 603 is cute too, kind of like an indoor Swedish style hot tub

The standard or 일반실 rooms don't come with baths in this motel unfortunately, so you'd have to stick with a VIP or deluxe room if you wanted one.

The We Hotel is similarly distanced from the center of Busan as Hotel View is, but again is situated right next to a subway line so you should have no problems traveling.

My final recommendation comes in the form of the V Motel. I have to admit that sourcing somewhere decent to stay that isn't 80,000 Won and above is tricky in Busan, there are plain or ugly rooms galore but few of them have a decent bath and a room that you'd wish to take a new girlfriend to.

So, that being said, the V Motel is yet again not in the center of Busan, in fact it's fairly close to Hotel View, but slightly further from the subway and bus terminal. 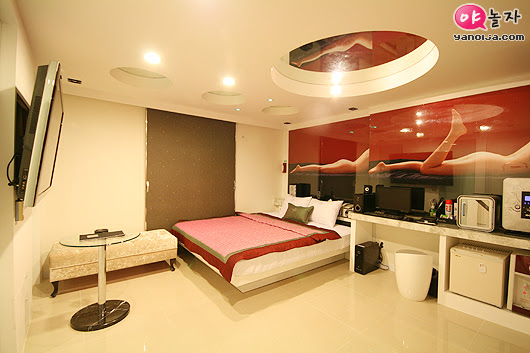 With a two person bath... But be careful when you pick your room or you could find yourself sleeping in something very bright... There's only a 5000 Won difference in price between the standard and deluxe rooms at V Motel so I'd counsel you to choose deluxe as the standards appear to lack a bath. With prices ridiculously cheap at th V with a deluxe room costing 50,000 Won and a standard 45,000 Won it hardly seems worth not going for the best.

A motel in Busan, near the station?

Greg, one of Goseong's resident English teachers is sadly departing to sunnier climes and leaving us to struggle through the chilly Korean winter without him. However, Greg needs somewhere to stay in Busan for a few nights next week before he heads to the airport in Gimhae and I offered to give him a hand finding somewhere to stay, or at least make a few suggestions...
Greg has a few simple criteria:
This should be simple as motel prices are generally much cheaper during the week and motels tend to cluster around stations and bus terminals.
However, sometimes I love hotel365 and sometimes I feel that it's a bit too Seoul-centric for my liking so I may have to get a bit creative with Google Translate and Naver to find some gems. If you can't stay somewhere fabulous on your last night in Korea, then when can you?
First up though, I have my trusty Busan fall-back, The Arirang Hotel. Granted, the photos don't look all that nice and the site is mostly in Korean, I have stayed at this Hotel a few times though and it's clean and comfortable. I also recall them giving me a morning wake-up call which is always welcome when you have to be somewhere.

Yes, the photo's tiny and I am cheating a little as it's not a Love Motel, but sometimes, when you've a plane to catch you just need reliability and you can't get much more certain that the Airirang.
Simply exit Busan Station and look to your left and you will see this sight:

This is the Arirang Hotel, it doesn't say so in English but you will see 아리랑 호텔 written across the top of the building.
From what I remember, the Arirang has English speaking staff at their front desk and is contactable on this number: (051) 463-5001 ~ 8
I should add that the Arirang doesn't quote any prices on it's website, but I don't remember having a heart attack when I stayed there last, so it can't be expensive.
After a bit of Navering (if you can Google then you can Naver, surely?) I found what appears to be a pretty classy joint, right in the neighborhood which Busan Station in located.

But the standard rooms appear pretty nice too.

And a decent looking bathroom...

A room like the one pictured above will set you back 50,000 Won, or perhaps 45,000, my Korean isn't good enough to work out the finer details I'm afraid!
So, Hotel Fashion is located about 5-10mins walk from the station. Personally, if I had a lot of stuff I'd get a taxi and simply give them this address: 부산 동구 초량3동 1162-3번지 but I'd say it's walkable as this motel is actually listed as being near the station.


View Larger Map
If you use 부산 역 (Busan Station) as your starting point then you should see the motel is pretty damn close.
You can also contact Hotel Fashion on 051-463-6171~2, though whether they'll speak English is another story.
I have checked on Google and there are at least twenty love motels clustered around Busan Station so you should be covered for all contingencies, whatever they may be.
I hope you enjoy whichever you end up staying in; keep in touch and let me know how it all went!
Posted by Rachel at 09:19 2 comments: